Another album, Cristina Branco's Ulisses that Amazon has in DRM-free 256kb MP3, while the iTunes Store has only DRM-ladden 128kb AAC. I used to have this album via iTunes, but a mistake when trying to rebuild my files after a disk crash sent it to /dev/null.

I've been reading Hard Road West: History and Geology along the Gold Rush Trail by Keith Heyer Meldahl. If you are interested in the mountains west from the Rockies, you need to read this book. The jacket blurb mentions John McPhee, but this is a very different book from McPhee's geology series. McPhee is a superior prose stylist who seeks to distill his encounters with the landscape and its professional observers into concise, striking, almost choppy prose. Meldahl is a less refined writer, but his geology is detailed, leisurely, brimming with a enthusiasm for the rocks that contrasts with McPhee's almost clinical detachment. In spirit — not in style — Meldhal reminds me of Stegner's John Wesley Powell biography Beyond the Hundredth Meridian. There's a sense of place, a love for a harsh landscape in both books that are very powerful in these two books.

Amazon vs iTunes, round two

Last month I tried the new Amazon MP3 service but I found a bug that caused files to be delivered at 160kb compression instead of the advertised 256kb. A few days ago, Amazon contacted me saying that the bug was fixed and asking me to try again to download the same album, Anouar Brahem's Le Voyage de Sahar. I just went through the process, which was a bit messy because I had to download the .amz files for each track individually and then get the real tracks downloaded by the Amazon downloader. In addition, there was a bit of confusion between the old, 160kb copies and the new 256kb ones, but all is well now and I'm listening to another Brahem wonder.

Out of curiosity, I checked the iTunes store for this album. They have it, but with DRM at 128kb AAC, not their DRM-free, higher-quality iTunes Plus. What's with this? Between DRM-free 256kb MP3 and DRM-encumbered 128kb AAC, it's no contest. I prefer AAC other things being equal, but this is definitely not equal.

Posted by Fernando Pereira at 7:56 PM No comments:

Halloween Special: My Inbox: Most Respected Profeser Sir Dr. Scot Andersen: I wish to join your esteemed research group. I have taken two courses in Signal Processing at the Technical College of Freedonia; thus, it is clear that I would be a perfect fit for your laboratory [...] (Via Shtetl-Optimized.)

There's a small but growing market here for a faculty social email filtering system that shares good responses to these types of messages and automatically selects one to reply with. A good project for a graduate student suffering from procrastinitis?

Posted by Fernando Pereira at 6:38 AM No comments:

That’s why I refer to the big cellphone carriers as the “Soviet ministries.” Like the old bureaucracies of communism, they sit athwart the market, breaking the link between the producers of goods and services and the people who use them.

Posted by Fernando Pereira at 6:24 PM No comments:

Now she tells us.

Posted by Fernando Pereira at 8:24 AM No comments:

A night at club baobab: Senegalese dance music of the 70's. From their early career, poor recording quality. Not the polish and variety of Specialist in All Styles, one of my top choices in West African music, but lively and warm-hearted.
Posted by Fernando Pereira at 5:44 PM No comments:

More fun with VPE: From an Andy Gill article on D.A. Pennebaker's rockumentary Don't Look Back (on Bob Dylan), in The Independent of 4/27/07 (the Joan in question is Joan Baez):

[quote from Pennebaker:] "I guess I tried to make that film as true to my vision of him as I could make it. But as a storyteller, I wanted there to be stories in it."

Pennebaker was aided in this regard by Bob Neuwirth, a singer and painter who served as Dylan's tour manager. Neuwirth had proved himself Dylan's equal in droll acerbity - he's the one who jokes, "Joan's wearing one of those see-through blouses you don't even want to!" - and he clearly saw part of his job as providing entertaining moments for the camera.

Yes, one of those see-through blouses you don't even want to, with a Verb Phrase Ellipsis (VPE) on the edge. (Via Language Log.)

Back in the 90s I spent a lot of time puzzling over ellipsis with my friends Mary Dalrymple and Stu Shieber. Our semantic theory of ellipsis went against the prevailing syntactic theories of the time. The examples in this (as usual) amusing and erudite post by Arnold Zwicky are the kinds of syntactic-theory-busting nuggets we were looking for back then. It's tough digging, but someone has to do it.

Posted by Fernando Pereira at 2:00 PM No comments:

On Being Twice a Square:
It's not my birthday (thanks friends, but I'm in between doubled squares), I just love the graphic on this cake: 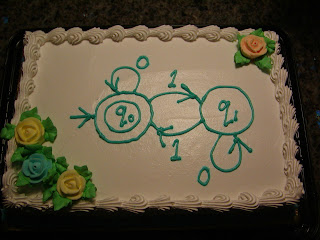 (Via Recursivity.)
Posted by Fernando Pereira at 10:09 AM 2 comments:

Fishing Expedition: A favorite phrase employed by some proposal reviewers is to accuse the PI’s of proposing a ‘fishing expedition’, meaning that the PI’s don’t really know what they are going to find but are hoping to find something. This is typically meant as a devastating negative comment: that is, one should have a more certain prediction of the outcome of the research or the research should not be done. [...] A previous trend in proposal-trashing involved the phrase 'stamp collecting' -- i.e., mindlessly collecting and organizing data. What's the next hobby-related pejorative, once reviewers tire of 'fishing expedition'? My personal preference would be 'zorbing'. Any other suggestions? (Via FemaleScienceProfessor.)

Posted by Fernando Pereira at 1:22 PM No comments:

Mobile phone use backed on planes

Mobile phone use backed on planes: Passengers could soon be using their mobile phones on planes flying through European airspace. (Via BBC News | Technology | UK Edition.)

Are they also going to add air marshals to stop irate passengers gagging overly talkative mobile users? Airlines agreed to stop on-board smoking for the sake of safety and health, and smoking addicts dealt with it. But the tobacco companies are not as smart as the telecoms. If they had proposed a special on-board smoking fee to be divided between them and the airlines, we'd probably still have on-board smoking. Because it is evident that the extra charges for on-board calls will be nicely divided between the telecoms and the airlines. At the expense of all the passengers who do not suffer from mobile addiction.

Posted by Fernando Pereira at 8:35 AM No comments:

In Praise of Yeast

In Praise of Yeast: [...] One of the best studied of all genetic circuits in the world is the one yeast uses to feed on a sugar called galactose. [...] So how did this elegant circuit evolve? (Via The Loom.)

To a programmer, this story shows a wonderful example of refactoring where one class (one gene) that has grown to do double duty is broken into two separate classes (to copies of the gene) that can then be changed to specialize on one task alone. The more I read about evo-devo, the more I notice uncanny parallels with the processes in large, long-lived software projects in which change is highly constrained by history and context. The main difference is that the programmers who change the code believe that the changes they make direct the code base towards increased fitness, whereas random mutations don't need to bother with the pretense.

Posted by Fernando Pereira at 8:23 AM No comments:

★ Total Music, Uh-Huh: BusinessWeek has a story — “Universal Music Takes on iTunes”1 — regarding a supposed proposal from Universal Music chief Doug Morris to create a music-industry-owned subscription service called Total Music. BusinessWeek twists the story into pretzel-like contortions to present this scheme as clever and reasonable.

While the details are in flux, insiders say Morris & Co. have an intriguing business model: get hardware makers or cell carriers to absorb the cost of a roughly $5-per-month subscription fee so consumers get a device with all-you-can-eat music that’s essentially free.

[...] In and of itself, Total Music is not a ridiculous notion, just like regular pay-by-the-month subscription services aren’t ridiculous notions. But we all know that device makers aren’t going to eat the cost — they’re going to pass it along to consumers. A Total Music music player is going to cost somewhere around $100 more than a similar player without Total Music. And it’s not like subscription services haven’t been tried before. (Via Daring Fireball.)

This model might make sense when players have effectively infinite storage — $90 is not an absurd premium for a device preloaded with all the music ever recorded — but for the time being, it makes no sense. Subscription services have not worked so far, so why would they work now? Also, "Total" is not likely to be that total. Why pay $90 to the major labels when you care most about independent artists and labels who are unlikely to buy into a system that dilutes their brand for a trivial fraction of the shared pot?

Posted by Fernando Pereira at 7:57 AM No comments:

Infinite Storage for Music: Last week I spoke on a panel called “The Paradise of Infinite Storage”, at the “Pop [Music] and Policy” conference at McGill University in Montreal. The panel’s title referred to an interesting fact: sometime in the next decade, we’ll see a $100 device that fits in your pocket and holds all of the music ever recorded by humanity. [...] in a world of infinite storage, no searching is needed, and filesharers need only communicate with their friends. If a user has a new song, it will be passed on immediately to his friends, who will pass it on to their friends, and so on. Songs will “flood” through the population this way, reaching all of the P2P system’s participants within a few hours — with no search, and no communication with strangers. Copyright owners will be hard pressed to fight such a system. (Via Freedom to Tinker.)

Read the whole argument. Hard to disagree with. A corollary is that traditional (C) protection will be impossible except in a police state, and very difficult even in one (I have personal experience of police state inefficiency).

One possible outcome is that recorded music will become an advertising medium, and live performances what really rakes in cash, for their rarity and uniqueness. Sort of like high fashion, which is not protected by copyright but prospers from the status value of owning the "real thing".

The Technical-Social Contract: We think we understand the rules of commerce. Manufacturers and sellers advertise; we buy or not, as we choose. We have an intuitive nderstanding of how advertising works, up to and including a rather vague notion that advertisers try to target "suitable" customers. Similarly, manufacturers and sellers have an understanding of how people buy and use their products. However, technology has been changing what's possible for all parties, frequently faster that people's assumptions. This mismatch, between what we expect and what is happening, is at the root of a lot of high-tech conflict, ranging from peer-to-peer file-sharing to Apple's iPhone. (Via SMBlog -- Steve Bellovin's Blog.)

A brief and lucid explanation of the main issues behind the file-sharing and iPhone fights. Highly recommended, with a bonus of links to very interesting supporting material.
Posted by Fernando Pereira at 8:49 AM No comments: