Will open-access publication fees grow out of control?

Will open-access publication fees grow out of control? If you care about open access to scientific articles, follow this link for a subtle and important argument on author fees and competing funding models. It's really worth your time.
Posted by Fernando Pereira at 8:42 PM 1 comment: 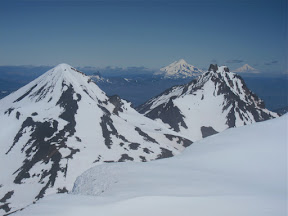 I finally had time to sort and upload some photos of my 4th of July trip to Lassen Park and the South Sister. I realized again that I should take lots more pictures on those trips, I get so drawn into the effort of the moment and into the sensory flood that I forget to get out the camera. Fortunately, my guide on South Sister caught more of that ascent.

Posted by Fernando Pereira at 11:11 AM No comments:

Carl Bergstrom - The Mathematics of Microbes

MTS54 - Carl Bergstrom - The Mathematics of Microbes: In this podcast I talk to Carl Bergstrom of the University of Washington about the mathematics of microbes. Bergstrom is a mathematical biologist who probes the abstract nature of life itself. We talk about how life uses information, and how information can evolve. But in Bergstrom's hands, these abstractions shed light on very real concerns in medicine, from the way that viruses jam our immune system's communication systems to to the best ways to fight antibiotic resistance.

Another interesting podcast, this time on uses of information theory and game theory to understand evolutionary and adaptive processes in living systems. It included a good informal discussion of how to think information-theoretically about genomes and evolution, although it could have been sharper if they had been more explicit about the tradeoff between information about the environment and compression/distortion. Two papers that seem worth reading: The transmission sense of information, which could have some nice connections to the information bottleneck, and Dealing with deception in biology, which I think would be a lot of fun for my security colleagues.

Posted by Fernando Pereira at 8:40 PM No comments:

MTS53 - Bonnie Bassler - The Bacterial Wiretap: In this podcast I talk to Bonnie Bassler, a professor at Princeton and the president-elect of the American Society for Microbiology. Bassler studies the conversations that bacteria have, using chemicals instead of words. Her research is not only helping to reveal how bacteria work together to make us sick, but also how we might interrupt their dialogue in order to cure infections.
I'm trying to catch up with a huge podcast backlog from when I was traveling in Europe, this discussion of biochemical communication and quorum sensing in bacteria is the coolest stuff I've heard in a while. The following open access paper has some of the technical details, it looks very juicy.
Posted by Fernando Pereira at 5:50 AM No comments:

(Late) Wednesday Whatzits: Hawaiian lava flows, more Katla mongering and a possible eruption at Ruiz?: [...] I would also like to derail some of this continued Katla-mongering, this time over at Cosmic Variance. This is not to say we shouldn't watch Katla, but all these swarms are still (1) too small; (2) too shallow and; (3) too short. I would place a safe bet that there are many more volcanoes worldwide that are much closer to eruption than Katla - and the connection between Eyjafjallajökull and Katla is tenuous at best. So relax!
Thanks Steve for the Eruptions link, they seem to be more relaxed about Katla.
Posted by Fernando Pereira at 4:43 PM No comments:

Here comes Katla?: Being kind of a volcano/earthquake geek, I regularly check in on [...] in the past couple months since the Eyjafjallajokull, the earthquake activity near it that might presage an eruption of Eyja’s big sister, Katla. Historically, eruptions of Eyjafjallajokull are followed by eruptions of Katla, which are an order of magnitude larger. [...] Since I have been watching, the number of earthquakes near Katla has been small, with a few periods of a dozen or so within a 24 hour period. Almost every time I have looked it’s been very quiet, perhaps one or two a day. I was away the previous two weeks, and apparently missed a day with 11 earthquakes on July 10. I checked again today, and I got the map below, with over a dozen earthquakes! [...] I bet it’s coming, though, fairly soon. The president of Iceland does, too.
I'm that kind of geek too, with also a propensity to try to climb and ski volcanos. Great stuff, although since I'm planning to get back to Europe in late October, I'm not sure I should be excited or dismayed.

Sweden for ACL, Lisbon for family and João's thesis defense, return via Philly for Kuzman's thesis defense. My flight to London, my first stop, just called.
Posted by Fernando Pereira at 4:20 PM No comments: 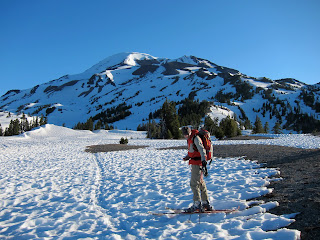 This Spring's heavy snow on the Cascade volcanos provided exceptional snowpack into the summer. Following my Cascade inaugural on Shasta and the end of May, I arranged with Pete Keane of Timberline Guides to guide me on a climb and ski of the South Sister in Oregon over the long 4th of July weekend.
On my way there, I stopped at Lassen for an altitude warm-up hike and ski on Reading Peak, a secondary ridge on the East side of the park. I hiked on the Paradise Meadows trail, next to the road closure point at Emigrant Pass, until I reached snow line at around 7k ft, skinned from there to the ridge at 8,400ft to ski some 600 vertical of nice corn snow, followed by 800 vertical of sun-cupped, runneled, pine-cone covered glop to the hike down.
On Monday, we started just after 4pm from the Devil's Lake trailhead, hiked to more or less continuous snow on a gully at around 6k, and skinned from there to the crater's rim at 10,200 ft with just a short pitch of bootpacking a headwall. The weather was incredibly clear for July, and a stiff cold wind kept us cool on the climb and kept the top 1500 ft vertical in top condition for skiing. Pete took lots of pictures and a few videos of the climb and of the great corn skiing up top, and also of the almost 1.5 mi plateau slog (both ways) over sun cups and runnels. A beautiful close to my most record-setting ski season ever: most powder days, most days of self-propelled skiing, most self-propelled summits, highest elevation skied. No injuries, either.
Many thanks are due to a diverse crew of ski partners (the largest ever, too) and guides in California, Oregon, and British Columbia. You are the people that make this crazy pursuit possible, worth doing, and safer than most would believe. And more than thanks to Ana and the kids, who let me do this even though it worries them more than they let on.
Posted by Fernando Pereira at 9:51 PM No comments:

I love NOAA and the USGS

Quietly, maybe too quietly, both NOAA and the USGS have been improving their free information access to the benefit of all of us who care about weather and topography. Point forecasts for the Sierra were a must for my backcountry tours this winter and spring. This long weekend, I am going to Oregon to ski (guided) the South Sister near Bend. I wanted a topo map to study the terrain before the trip. I bought a while ago the National Geographic TOPO program with California maps, but I could not find the Oregon DVD at REI in Mountain View, and they do not offer a map download service. I searched [download topo maps]. The top ads were for (pay) map download service with awful, useless interfaces if you don't know which topo quad you want. One of the top organic search results was for the USGS Store, which has a nifty integration with Google Maps: search for your interest point on Maps, and then click on the marker for your interest point to find which USGS maps cover it. Buy the paper map, or download a good compressed image of the map for free. Great mashup, just what I needed.

One more service that government does right, and private enterprise has neglected totally. I would have paid $49.95 for the Oregon TOPO! maps at REI or online (if available for download), or a fair fraction of that for the quad I was looking for. But none of those "services" were usable, while the USGS came through.

Posted by Fernando Pereira at 8:32 PM No comments: