Music SSD in the foreground, player in the in the middle, DAC (green/black) and amp (blue) in the background. SSD is connected to one of the Pi 2 USB ports. Digital audio goes out through an BNC connector from the 502DAC bolted to the back of the Pi touchscreen and plugged into the Pi hat connector. BNC coax cable connects to the DAC. Left picture shows the main piCorePlayer menu; right picture shows the Now Playing screen, in this case for the first track of Marc Ribot's excellent Silent Movies. 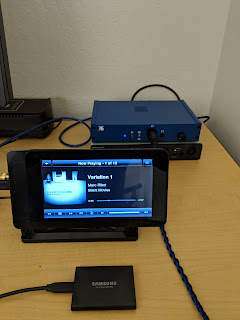 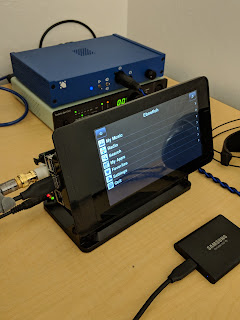 Posted by Fernando Pereira at 10:00 PM No comments:

For the last several years, all my recorded music listening has been from lossless PCM FLAC stored on a Synology NAS. I went through several iterations of Ethernet-based streaming from the NAS, but now I've settled on a Roon server on a Ubuntu Intel NUC that streams to a couple of different Roon endpoints: an Auralic Aries Femto for the living room speaker system, and an Allo USBridge for the study headphone system. Those endpoints connect to DAC>amp>transducer chains.

For work, however, I want my music system there to be standalone for convenience and security. After a bit of exploration, I settled on the following hardware:
The player connects with a S/PDIF coax cable to my Soekris dac1541 DAC/amp, which on its own it is a very nice source for my MrSpeakers Æon Flow Closed headphones. However, I currently have an extra Neurochrome HP-1 headphone amp, and that sounds even better between the DAC and the headphones than the dac1541's built-in amp.

What remained was to find standalone music player software that would run well on that low-power computer. I started with RuneAudio, which worked but was was sluggish, often missed command touches, and sometimes got stuck doing harder chores. Scrolling through my 1TB music library was really annoying. I also tried Volumio, but I could not get it to run stably on my hardware.  Eventually, I heard about piCorePlayer on an audio forum as being really lightweight -- it runs from RAM disk -- and decided to give it a try. All of those three Linux-based players are mainly designed to stream music from a separate server or streaming service, but RuneAudio and Volumio can in principle work standalone from a local USB disk.

My adventure was to try to get piCorePlayer to work standalone, even though it is mainly a replacement for the formerly proprietary networked Squeezebox player. I managed to get this to work thanks to advice from kind users of an audio forum as well as a lot of searches for documentation and other forum info. In brief, I eventually succeeded, and the resulting player works really well, scrolling quickly through my big library and allowing me to select the right album for what I'm working on those precious times I'm not in meetings. Here's what I did:

Posted by Fernando Pereira at 11:36 AM No comments: