CardioTrainer v2.8.1: Split times on the map and bug fixes 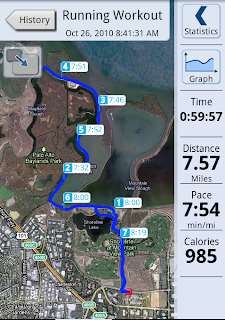 I'm pretty happy with CardioTrainer, I paid for the Pro version just to support them for a nice program even though the free version was good enough for me. RunKeeper still has better statistics features, but GPS tracking and pausing are much more reliable on CardioTrainer. And it's fun to see my times getting shorter on my favorite routes, 7.57 miles @ 7.54 min/mile today.

Posted by Fernando Pereira at 11:21 PM No comments:

I wasn't sure what to expect. I think I had heard James Carter with Christian McBride in Philly some years ago, the set was technically stunning but rather cold, maybe the result of playing in the beautiful but distancing Perelman Theater at the Kimmel. The set at the Herbst Theatre for the SF Jazz Festival started slightly ragged: Adam Rogers's electric guitar seemed to be drowned by John Medeski's over-emphatic playing on the organ. But then Carter told us in his introduction to expect some live adjustments as that this particular ensemble had not played together since over a year ago. At some point in the first number, Rogers walked out and Carter followed him backstage and they walked back talking to each other a few minutes later. Maybe nothing unusual, but we couldn't really hear Rogers until then, and I know from his work with Chris Potter a few weeks ago that he's not showy but you can really hear his amazingly complex and subtle work when he meshes with the rest of the band. The set got steadily better after that, with Carter, Ralphe Armstrong on acoustic and electric bass, and Lee Pearson on drums working to stitch the team together and create space for Rogers to bring out his concentrated magic, which is never easy to follow but rewards with concentrated, unexplainably gripping harmonies and rhythmic complexity. As the set developed, it got increasingly more coherent, more surprising, and totally different from anything I've heard in the last several years. All in all, I didn't find Medeski as convincing as the rest of the band. Armstrong and Pearson were outstanding (I had never heard either live), Rogers confirmed the strong impression I had from the Potter Underground concert, and Carter did a lot more than just confirm his virtuosity. After the main set, Carter and Armstrong did a beautiful, full of heart and humor duet of a Don Byas composition.
Posted by Fernando Pereira at 12:21 AM No comments:

Posted by Fernando Pereira at 6:21 PM No comments:

Let's do more computer science: [...] But I'd like to see young computer science students get up and present to their teachers some new computer science. [...] Example: Here's a group of researchers at ten universities scattered around the world. They're collaborating on a presentation they will do at a conference in eight months. Most of the research is done, they just have to assemble it in a convincing way, while giving each contributor proper credit for their work. Here's a list of the current tools they are using. At this hackathon each group will create a tool that in some new way helps them collaborate. The projects will be judged strictly on utility, not eye-candy appeal. [...] Don't worry though, eventually there will be money here. But by putting it first with people who are better at using the Internet than pitching venture capitalists, we all get a chance to have some fun, learn from each other, and actually accomplish something useful in the time we have together.
I really like this idea of Dave Winer's. His collaboration tool example is a favorite of mine. I've faced the problem many times, and none of tools around are even close to adequate for the task. We have either cloud-based or P2P doc systems that impose their common denominator document formats, or, at the other end of the spectrum, some version control system where we store document files plus some conventions to avoid stepping on each other while editing ("You have the token for Section 2").
As to Dave Winer's main point, he's right on the money. Current computer science education has too few opportunities for extended focused creativity. Class projects are most often dead-end reconstructions of old solutions for established problems rather than new solutions for unsolved problems. In part this is because school time is fragmented into many small slices, in part because organizing teaching and student evaluation around open-ended projects that are likely to fail (as most experiments do) is really hard. It's interesting to note that those two difficulties, fragmented time and the likelihood of failure, are also very serious issues within companies. We need to come up with better ways of framing collective learning, discovery and invention that encourage creativity, get value even from failure, and give fair credit to individual contributions.
Posted by Fernando Pereira at 9:53 AM No comments: