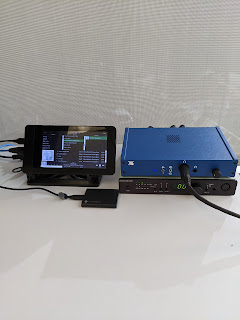 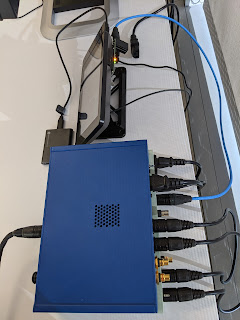 Posted by Fernando Pereira at 8:28 PM

Really enjoy your comments on SBAF and now on your blog. I'm thinking of buying the Schiit Yggdrasil after it's been upgraded to Unison. I need to wait as I live overseas and it just isn't convenient to ship things around + it's expensive. I'm really interested in the pi2AES touchscreen approach you've taken. I use Roon but find it annoying that whenever I hear a track that I like, I need to turn on whichever screen I'm using to control playback or even to mute the music in case of a phone call etc. I'm a total and complete noob with Pi based stuff and am a retiree. May I ask if the screen is always on and readable from a distance of 6 to 8 feet? Also, do you have an idiots guide to building and setting up the transport you've created? Finally I heard the Moode is having financial difficulties; if it shuts down what implications does it have for a user? Thanks for sharing your article and enjoy the music mate. Cheers Roy

1) Screen is always on, but not readable from 6 to 8 feet, at least not with my eyes.
2) I posted some earlier blog entries that explained how I put the hardware together with a 502DAC board from Pi 2 Designs. I replaced the 502DAC with the Pi2AES recently, but I've not updated the instructions.
3) I did not know about moOde's problems. It's working well for me, even if it does not get any further updates.

4) Yggdrasil with Unison works very well with a good, inexpensive USB transport like the Allo USBridge, although as I wrote on SBAF, Pi2AES might be even better.
5) I have to use moOde because my music at work is on a local SSD. At home, I have a NAS with CD rips and digital downloads, as well as Qobuz, all through Roon with an Intel NUC core. The home streamer to Yggdrasil is an Allo USBridge running DietPi (no screen).

Thanks mate for the very detailed and rapid answers. I might just wait then for Yggdrasil with Unison to be launched. I'm using Roon core on a general purpose Intel i5 PC with CD rips & digital downloads + Qobuz with an external SSD and this seems to work well with my low budget chifi SMSL M8a DAC into my Rogue Audio Cronus Magnum 2 amp. There are many discussions about USB noise from general purpose PC sources; do you find Unison negates the need for a home streamer? Would my PC do justice to the Yggdrasil or do I need a NUC/bridge/streamer/player as well. I want to use the potential of the Yggdrasil but don't want to waste money chasing audiophile unicorns... Really appreciate your sharing and your time Fernando!
Cheers
Roy

Don't really know if PC>USB>Unison will do full justice to what the Yggdrasil can be. In your situation, I'd start with Unison Yggdrasil directly connected to the PC and go from there. If that doesn't fully do it for you, then a Pi-based streamer like the Allo USBridge Signature (USB) or the Pi2AES (AES) as a Roon endpoint connected by Ethernet to your current Roon core would get you even closer to Yggdrasil's full potential.